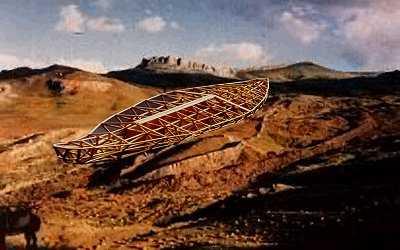 The site of the remains of Noah's Ark on a mountain across the valley from the much-favored Mount Ararat is, and probably will be controversial until all of the evidence is excavated from this amazing location. First, and very briefly, there are the Ark remains in the form of a 538 foot long boat impression in a mud-flow adjacent to the Kurdish village of Uzengili. The boat shape is a double-ender in classical shipbuilding terms and necessarily so, for the Ark of Noah was a nautical design, not a large shipping container. This structure is not a naturally occurring one. Geologist have looked at it, and no honest, reliable geologist will claim that it is natural, except perhaps someone like radical evolutionist ( & skeptic) Ian Plimer of Australia (who has been recently discredited in an Australian court for his zealous and untruthful attacks on those who believe that there was a flood and wants to discuss it publicly). We should be skeptical of Mr. Plimer whose irrational and ultra-zealous attacks on Noah's Ark or flood believers has caused him not a few problems at home.

The traditional box-shaped ark has become a reality in most minds because of the square dimensions given in the Bible. What is not generally known however is that ships are referred to in three measurements: first the length, which is a hard number, and an actual measurement of length. The second number always refers to the average width, given that a ship is wider in the midships section than at either end. This figure is ALWAYS an average of width. And finally the height dimension which includes the hull and superstructure if any. The dimensions of the Ark-mold shape at Uzengili on the slopes of the mountain called locally Cudi Dagi (pronounced Judi in Turkish), fit precisely into a 50 x 300 square-measure rectangle using the 22 inch cubit. It is an assumption that the 18 inch Hebrew cubit was used in the Ark's construction. One will notice that the actual length of the cubit is nowhere given in the Bible. The site of the Ark of Noah on Cudi Dagi is, for now, going to have to be left to the reader's evaluation of the photographic and geologic evidence thus far gathered. Several photos will be presented here.

The discovery of this Ark-mold structure came in 1948 by a shepherd from Uzengili village, named Reshit Sarihan after a series of earthquakes causedthe surrounding mud-flow terrains to fall away due to their lose, expansive nature. These earthquakes caused the hull-mold of Noah's Ark to appear to rise up from the ground. This was well-reported in Dave Fasold's book, The Ark of Noah, published in 1988 by Wynwood Press, NY, and previously in the September 1960 issue of Life magazine and the July 1960 issue of PIX magazine from Australia.

Ron Wyatt's name should be mentioned here, as one who had a great deal to do with the acceptance by the Turkish authorities of the site as Noah's Ark. It is, largely due to Ron's and Dave Fasold's efforts that the site is now a national treasure with park status and a visitor's center. This has caused a problem as far as archaeology is concerned. There has been a reluctance to allow digging on the structure, for fear of detroying the ship-shaped hull-mold of the Ark. Some have used this to falsely claim that Turkey is doing this merely to get tourist money for the area, and others that the Turkish government might actually find archaeological evidence that proves the Ark and this would go against their official paradigm. This cannot be farther from the truth. That is not to say that all in Turkey agree that this is the Ark of Noah (Nuh'un Gemisi). Many in the Turkish government believe that the story of the flood is only a myth. What the exact reason for the lack of digging is, I cannot say with accuracy.

There are several negative things about Wyatt's efforts on the site which do nothing to help but hinder it, foremost of which was his attempt to fabricate rib-evidence on one side of the Ark-mold structure. His other claims of "petrified wood and animal hair" are unsubstantiated. The Ark however, was not his discovery, but to his credit he did find the Ark's anchor stones at Kazan.

It is of interest here to point out the in the Sura Hood of the Koran, it states of the flood, that "the affair was finished and the ark rested on al-Judi." The Koran does not say what "Al-Judi" actually is. We may safely conclude that it is a mountain because of the many supporting flood accounts which do claim that it landed on a mountain. Is it mere coincidence that the Ark-mountain opposite Ararat, is called Judi? Of course, Dave Fasold pointed out in his book that Berosus, a Chaldean priest of the 3rd-century B.C. made the same statement 900 years before the Koran offered its agreement. Lastly of this place we must point out that in the Bible, the ark came to rest in the hary urartu, or the "mountains of Urartu," and a single mountain is not named. Ararat, by the way was not named Ararat until the middle ages (approximately 1105). It is named Agri Dagi (painful mountain) and is a classic volcano which last erupted in the mid-1800s. There is the possibility that the mountain was not even a mountain (at least to 15,000 feet altitude) at the flood's end.

Here we end the discussion, pro or con of the Ark. We feel that the aerial photographic evidence is sufficient to compel a positive conclusion. And here the discussion would have ended had Noah's capitol city of Mesha-Naxuan not been discovered by photogrammetric techniques in July of 1997. 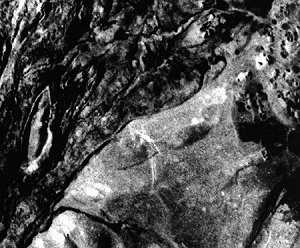 I was given a 1959 Turkish Air Force mapping photographic negative by Dave Fasold, which was given to him by Rene Noorbergen. It clearly shows the Ark stuck in the mud-flow. What attracted my attention was the fact that it was impaled on a large rock outcrop. My reasoning was that it must have slid down from higher up on the mountain, which indeed it had. I made a 16" x 20" enlargement of a 3"x 5" section of the negative and soon found the impression where the Ark had originally touched down. Here was a clear outline, highlighted by the sun, of the berm created by the great ship, lying hard against a thirty foot high escarpment of limestone where Noah had landed her. The outline was precisely the same shape and size of the Ark-mold a mile farther down the hill and 1,200 feet lower where it had obviously slid after many years -perhaps by earthquake and rain to soften the earth. One may see this in the accompanying 1959 photo. This detail had not been previously noticed.

This led me to send a copy to Professor Salih Bayraktutan with Dave Fasold for further evaluation. Later, I made an even larger blow-up and began to see hundreds of house foundations. In the final analysis, there were at least a thousand still visible rectangular depressions in the area. Here was the long-lost city of Mesha- Naxuan, referred to in the Bible (Genesis 10:30) and by Gilgamesh as the "Mountains of Mashu," where Noah and the flood survivors built the first city. Other writers have also mentioned it, they include Claudius Ptolomy, Josephus, and Armenian historian, Moses of Chronensis.

The name for the mountain "Cudi" makes reference to the first and longest lasting inhabitants the Kurds. Josephus claims that the ark landed in the mountains of "Cordyaeans" meaning Kurds. The actual name of the mountain is Cudi Dagi which means "mountain of the Kurds." In Hebrew the word kHD (Strong's # 2298) means "first." Cudi was the first landfall, the first human habitation, and the present inhabitants still refer to themselves as Kurds. The Kurds at some past time must have seen themselves as the first people in the area. Thus the importance of the original name of the mountain, phonetically "kHudi" cannot be over- stressed. (Judi is a Turkish and Arabic pronunciation based on the difficulty in pronouncing the Shemetic kH (cHayth) used at the time of Noah. It is a gutteral explosive growl sound. It may be transliterated as C, Kh, Ch, and perhaps has even crossed over to Jh, as the evidence seems to suggest, hence "Judi." is an early Chaldeanattempt at vocalization. (because Berosus made the claim first).

Archaeology on the mountain has begun as of this October 1999, as a result of our two field investigations (1998 and 1999) under the aegis of the Ataturk University in Erzurum with professor Bayraktutan in charge of investigations. I am proud to say that the professional academic attitudes of arrogance with respect to non-professionals are not visible in Turkey as they are in America. A nonprofessional has discovered the world's prime archaeology site the first post-flood city of Naxuan, and the professionals actually have taken the time to have a look at it and the result is an official archaeology project has begun. Shades of Heinrich Schleimann of Troy and Micnae!

Lastly mention must be made of the hundreds of thousands, perhaps millions of graves that also show up in the photograph. Suffice to say that three human ribs were legally exhumed from a reliquary burial in the upper city region near the ark touch-down point in October, 1999 by SEPDAC (an international scientific organization established to investigate the region's early post diluvial culture). These relics along with pieces of the pottery container are presently in the United States awaiting dating measurement funding.

With respect to Naxuan, Moses of Chronensis, quoted by William Whiston in his massive translations of Josephus' work, states in a footnote on p. 29 (Antiquities of the Jews) that the city of Naxuan was "the place of the first descent." This fits in well with the archaeological evidence thus far gathered, of a landing higher on the mountain, as indicated in the Air Force photograph, and a later downhill plunge of the Ark to its final resting place at the site of what later became the second city called "Seron." In the same photo, the city remains are clearly visible next to the Ark. The term "place of first descent" is important because that second descent downhill is implied.

Also, in the Epic of Gilgamesh, when he got to Utnapishtim's home (Noah) Gilgamesh had arrived at the "Mountains of Mashu." The slope is still called Mashu-r to this day meaning "resurrection day." Gilgamesh stated that there..."were the twin peaks as high as the wall of heaven that guard the rising of the sun," peaks that he called "paps" or breasts. These peaks may be seen there at the top of the mountain, the twin peaks at either end of the great limestone escarpment that rises above Naxuan's ruins directly to the east, that indeed "guard the rising of the sun" as Gilgamesh claimed. The northern peak is called Ziyaret which appropriately means "shrine" and is so delineated on modern maps. The southern peak is called Cudi Dagi (Judi).

The Uzengil or high limestone ridge "saddle" which is the main north/south escarpment is also called Yigityatagi which means "Hero's anchorage or bed." 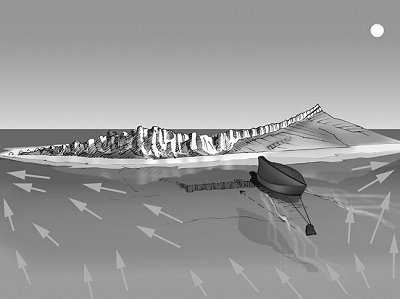 Please make an honest evaluation of the evidence, remembering that nothing has been found on Mount Ararat, and emotions alone hold people to that mountain.

All the truth asks is a hearing.

A book by the present author, is in the printing at this time November 10,1999 that will have a section on this great site. Although the main thrust of the book is the dinosaur destruction and contemporaneous earth-rending continent-spreading catastrophe, a section needed to be presented on the flood of Noah, in order to show that it was a later and separate event. This book is called The Day Behemoth and Leviathan Died, It is due out in late December 1999.