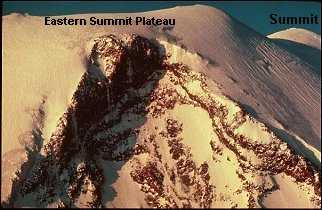 Dr. Willis appropriately theorized that for the ark to survive on Ararat, that it must be in a stationary ice pack, otherwise the moving glacial forces would have destroyed the ark. Dr. Willis and team surveyed the eastern summit area using a SIR subsurface radar and also conducted some ice core drilling using a PICO ice drill. No evidence of the ark was discovered, but scientifically eliminating a likely landing area was a major contribution to ark research.

The grid lines show that the team thoroughly covered the eastern summit and over the high ridge leading to the saddle area between the two summit peaks. Just to make sure, three holes were made (one to 40 feet) using a PICO ice drill. Though no traces of the ark were discovered, this expedition conducted some of the best research on the mountain.

Some question why other areas of the ice cap were not surveyed by the Willis team. 1988 Snow Tiger team member Carl Nestor states...

As for why we didn't go over and check out other areas:

1. Our job was done. We had come to search a particular spot and had done our work. We had accomplished our mission with perfect success. We proved with 100 percent confidence that the ark is not located on the eastern plateau or the area between the two summits.

2. We didn't have a permit for other areas. There had been some terrorist activities reported close to the mountain, and the gendarmes were hesitant about our being on the mountain in the first place. Our leadership didn't think it would be prudent or truthful to violate our permit. We didn't have enough time to get an expanded permit. On our last day on the mountain, we did survey of the area between the two summits.

3. Our radar needed to be returned. Mr. Rohnigen had personally rented our radar, a very expensive and sensitive piece of equipment. Since our job was done, and there was no time to get an expanded search permit, and little belief that the ark was located any where else, our group left the mountain.

Dr. Willis now believes that the ark landed on the much smaller Mount Cudi, and that the ark was probably dismantled and utilized by Noah and his family after the Flood. Dr. Willis expects to find wood fragments and other evidence to verify Noah's Ark landed on Mount Cudi. He has been to Mount Cudi on two occasions, and is planning an expedition in 1999. 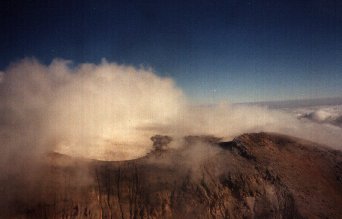 Sun and camera angles can reveal many ark anomalies on Mount Ararat. Notice the object in the middle right of the above photo. I took this photo from a helicopter in 1989. The object is located at around 16, 800 feet on the southeastern edge of the eastern plateau/summit region. I know of an account that places the discovery of wood timbers in this location. This area is very close to where our 1988 high camp was located and we did not notice anything of interest, but we had more snow cover than what is showing in the above photo.