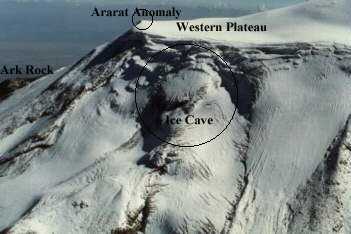 The "Ice Cave" or "Eye of the Bird" as it is sometimes called, was initially thought to be the remains of Noah's Ark in 1989, but after a closer inspection is now believed to be rock or possibly a volcanic vent. Some ark researchers believe the Ice Cave may have been what some others have thought to be Noah's Ark in the past. Like other potential sites for the ark, they should be "carefully" eliminated using our best scientists, equipment and techniques before we right them off.